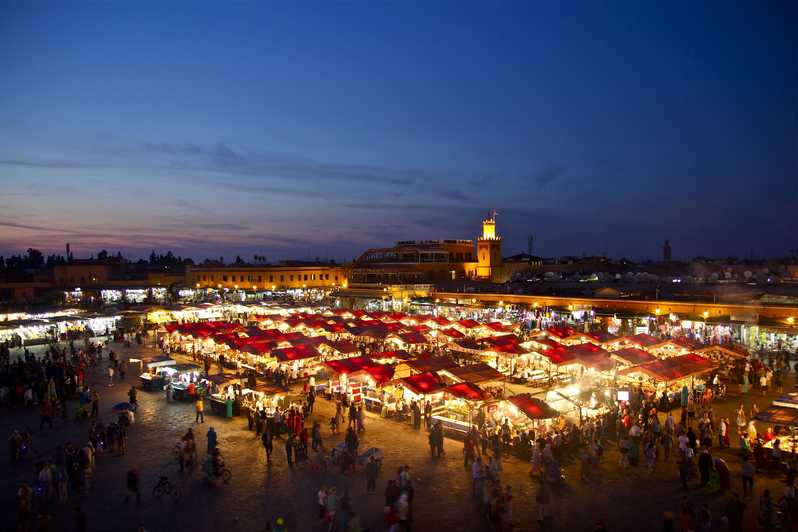 When the city of Marrakech comes up in discussion, many images may come to mind. Some may immediately visualize the city’s alleyways and mosques, while others may think of museums, marketplaces and even movie locations.

The reality is that Marrakech is a hub of all the aforementioned sights and more with old and modern quarters. In this post, we’ll take a quick look at both these areas and our destination picks that travellers should visit.

The Old City of Marrakech

The Old City of Marrakech offers visitors a rich experience by virtue of an assortment of cultural, historical and touristic attractions. This section of the city is fortified and packed with vendors and stalls. The old city (and Medina) was turned into a UNESCO World Heritage Site in 1985. Many of the buildings in the Old City have since been renovated.

A stroll through the old city takes place within city walls and narrow alleyways with stellar views of landmarks dating back to the 12th century. The Old City is ideal for those who want a glimpse into Marrakech’s past or want to learn more about the Five Pillars of Islam. It’s also the ideal locale for those looking to lose themselves in city streets or shop for exotic goods in the city.

The Modern City of Marrakech

The “other side” of Marrakech is also just as vibrant as the old city but aesthetically quite different. This side of Marrakech is centred around the contemporary scene that began in the early 20th century, which was essentially a French area.

It is a thriving centre for art, design, fashion, and entrepreneurship. Travellers will encounter familiar retail stores here such as Zara and H&M, along with popular fast-food chains like Starbucks and McDonalds. For visitors who want to feel like they’re in New York City or Paris in Africa, this portion of the city provides that vibe.

For travellers who are looking for things to do in Marrakech, they can rest assured that there is no shortage of attractions to see. History and culture buffs alike will lose themselves in the wonders of the old city, while contemporary and artsy-folk will feel energized walking through its modern areas. Both sides of the city will provide plenty of photo opportunities and memories that will stick with visitors for a lifetime!

We advise travellers to consult a guide on their excursions to get the most out of these attractions. Here at Le Farnatchi, we can make arrangements for visitors to see all the great sites of this wonderful city as well as help with booking drivers, guides and much more.

This website uses cookies to improve your experience while you navigate through the website. Out of these, the cookies that are categorized as necessary are stored on your browser as they are essential for the working of basic functionalities of the website. We also use third-party cookies that help us analyze and understand how you use this website. These cookies will be stored in your browser only with your consent. You also have the option to opt-out of these cookies. But opting out of some of these cookies may affect your browsing experience.
Necessary Toujours activé
Necessary cookies are absolutely essential for the website to function properly. These cookies ensure basic functionalities and security features of the website, anonymously.
Functional
Functional cookies help to perform certain functionalities like sharing the content of the website on social media platforms, collect feedbacks, and other third-party features.
Performance
Performance cookies are used to understand and analyze the key performance indexes of the website which helps in delivering a better user experience for the visitors.
Analytics
Analytical cookies are used to understand how visitors interact with the website. These cookies help provide information on metrics the number of visitors, bounce rate, traffic source, etc.
Advertisement
Advertisement cookies are used to provide visitors with relevant ads and marketing campaigns. These cookies track visitors across websites and collect information to provide customized ads.
Others
Other uncategorized cookies are those that are being analyzed and have not been classified into a category as yet.
Enregistrer & accepter
https://bestvpncanada.ca/